Which is better? The Wigo or the Mirage and the better option wins.

What sub-compact should be chosen, when shopping for one in particular? Especially when on a tight budget which pretty much determines what will be picked? Two such options like the Wigo and the Mirage which are one of the most common cars on the road. In “Car Showdown 101: Toyota Wigo vs Mitsubishi Mirage", both of them will be compared and contrasted based on their specifications. To see which is the better option for anyone to pick!

Since their introduction to the sub-compact market, they’ve been duking it out, but the Mirage has more to offer in some features. Unfortunately, the Wigo is geared for the mass-market every man’s car which explains why it’s made that way! Read on to find out more, to choose the better option. 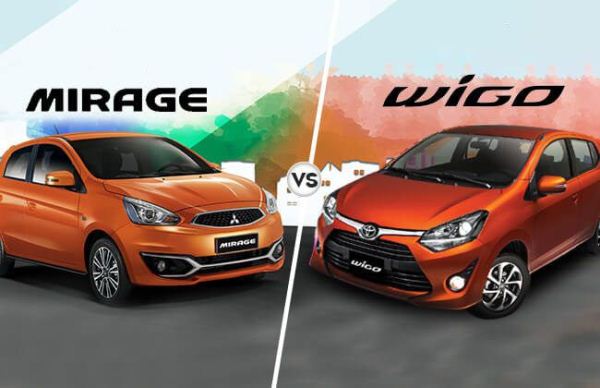 Squeezing the smallest inch is important for sub-compacts to yield more elbow and knee room.

Having more than enough room will be better and justifies the cost of any unit, that has a bit more size to other options.

Good: The Wigo is much smaller, than the Mirage but is much taller by five millimeters.

Bad: In other dimensions; like length and width which is much smaller than the Mirage.

Good: Compared to the Wigo, the Mirage is bigger in two dimensions, but a difference of five millimeters in height is not much to sneeze at.

Bad: Overall, there’s nothing bad because five millimeters is too small a difference.

Verdict: Mirage wins this first round and does with ease. Toyota’s subcompact is way too small with the larger mirage.

Performance is what makes brick and pocket-rocket which is what these two are. But, one is a slow brick, and the other is a faster one by far. It’s good to give a little TLC for performance too!

Good: It’s got only a few specs going for it and is underpowered. Its rear suspension and the price is what’s going for it, which is not enough. Boom! Toyota should beef it up more like Mitsubishi.

Bad: Everything that matters is missing and should be given better TLC.

Good: Get this Sub-compact because it blows, the Wigo out of the water and has better numbers by far.

Bad: Nothing is bad but all good, so it does a good job.

Verdict: This round is won by the Mirage, hands-down with no effort at all. Performance should be equal to the cost of the unit, but not paltry specs and paying a high premium is not smart!

Safety is a top priority that should be number one, on a car’s features list! Employing the necessary suite of equipment that keeps everyone safe, both children and adults! If this is not the case, then consider another option.

Good: Equipped with a load limiter and ELR seatbelts that is sufficient, but needs Isofix mounts as a standard.

Bad: It has no EBD, or Isofix mounts for car seats, which can be a problem for overall safety.

Good: Everything is equipped that is necessary, except for a load limiter equipped  ELR seatbelt.

Bad: None and it's all good for overall safety.

Verdict: The Wigo tripped it with poor equipment, which is only a four-star safety rating. But, the Mirage nailed it with a five-star rating!

Most compact cars tend to have the same comfort features unless it’s premium. Cars in “Car Showdown 101: Toyota Wigo 2018 versus Mitsubishi Mirage 2018” should have even the most basic comfort features, if not it won’t be a good choice!

Good: It has similar comfort features compared to the Mirage.

Bad: Nothing to mention because it’s all good!

Good: It a draw and both are average in comfort features, which is good for both options.

Bad: Bad is not applicable because basic comfort features are a staple here.

Verdict: Ended up in a draw for both, both are equal options.

In car “Car Showdown 101: Toyota Wigo vs Mitsubishi Mirage” the extras will win the point, and that makes a big difference between a good or bad option!

Good: All the exterior parts and equipment are complete, which should be the case.

Bad: Compared to the projector headlights; using HiDs will give better illumination when needed.

Good: All is good here, and its HiD equipped for better illumination too. The entire exterior is complete with the necessary equipment.

Bad: This is a clean run, and there’s nothing bad to note!

Verdict: Mirage gets the last round easily, just because Mitsubishi paid attention closely! Wigo needs to have some improvements in some areas, or it will be a lesser option.

6. Toyota Wigo vs Mitsubishi Mirage: Which is better?

Looking for a sub-compact? Between the two in “Toyota Wigo vs Mitsubishi Mirage”, the Mirage stood out easily without any difficulty. Although, the Toyota Wigo is cheaper settling for a four-star rated sub-compact is optional as well. Here are the reasons; why the Mirage is an alternative option to consider, but the Wigo is also an option too.

Between the two in “Toyota Wigo vs Mitsubishi Mirage”, the Mirage stood out easily without any difficulty

Now, with the final tally and the Mirage wins with ease, the Wigo is will need some tweaking but still an alternative option. Get the Mirage for the best all-around value, sub-compact that’s worth every penny.