East versus west in this SUV match-up to see which will prevail, efficiency or sheer power?

When it comes to SUVs and what it offers, it can be dicey options but in this car comparison, SUV will strut its stuff. SUVs are selling like hotcakes, and these two options are gunning for everyone’s wallets! One thing that makes them distinct is sheer size, over other cars. They are mid-sized Godzilla that stalks the streets and can pass through flooded streets too.

Smaller cars will be like wet cats, but these monstrous pickups will at home in all terrain that is passable.

Between the Trailblazer and the Fortuner, there will a specification throw down to see which is the better one for the money! Will it be the Jap SUV that is in its next version that promises a lot for this segment? Or will it be the Trailblazer that is classic robustness, in and out which is also a classic “BURLY” ride.

Both have their appeal and no doubt, the unit cost will be a sheer factor when the greenbacks come out! But, both have what it takes to the top choice for anyone.  East or west is in the house and let's get this party started. 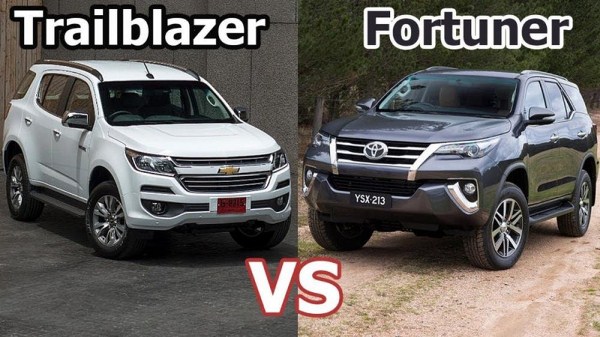 Most mid-sized SUVs are usually quite bigger than most cars on the road which is why they are the “Sultans of Size”. Compared to other cars with less size and clearance they can go anywhere!

Good: It gets the first point and wins without a hitch. Has more size to go around in all dimensions, even a deeper wading depth.

Bad: Nothing bad noted and it’s a good all-around win!

Good: Overall, it is a good sized option; but the Trailblazer is way bigger!

Bad: It gives away a total of 152 millimeters to the other option, which is significant.

Verdict: The first round will go to the Trailblazer that has more than 152 millimeters of extra size over the Fortuner. A wading depth of 800 over 700 millimeters that’s a big deal to boot!

An SUV should have a superlative performance for better mobility and power when it needs it. Maximizing all power and pull with extras that boost performance to better heights.

Good: This SUV has everything it needs for the city or great outdoors, with humongous power and pulls too. Add up the better-tuned suspension that handles a smoother ride better, over a stiffer one!

Bad: Nothings limp in this option, so it’s a zero which is bad for it here in this round.

Good: Fortuner has an average performance with all the right thing needed for the city or country road!

Bad: It loses badly to the Trailblazer in key specifications, that should have been better.

Verdict: The big bad truck from the west powers through and wins by mowing down the Fortuner with ease.

Safety is always a big deal, and most big cars are safer than smaller cars. But, other modern and newer safeties make bigger SUVs like tanks on the road.

Good: This option has a good a good set of safety equipment, that should be the case.

Bad: Besides the dual airbags, there should be more equipped like the AEB system, more than makes up for it.

Good: All the safeties that matter, especially the curtain, side, and knee airbags for better passenger protection with five-star plus rating too!

Verdict: A magnificent draw which shows why SUVs are the best options, for anyone. Neither wins but are good options for everyone.

Another reason why SUVs in this battle get more love is that all the best comfort features are equipped! Most car makers try to out-do each other with small touches that count. 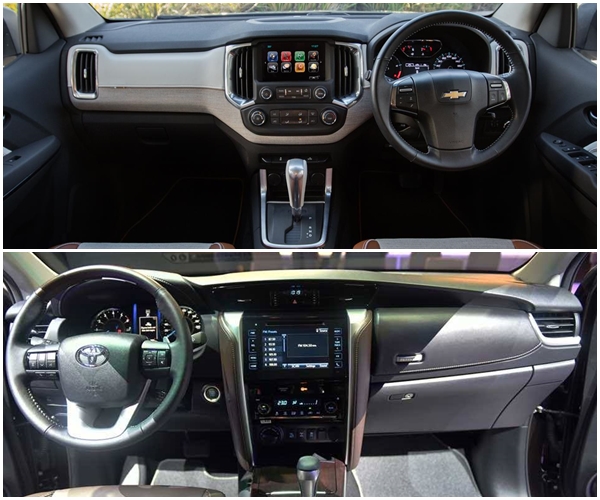 Small touches count and the Fortuner, does win it with a “no-pinch sensor” that shows what TLC means to Toyota

Good: As an option, this SUV is complete with all the necessary comforts like a Ritz Carlton on wheels.

Bad: Sometimes, fingers and hands get pinched in power windows, and it has nothing to prevent it.

Good: Just like the Trailblazer, it’s got everything all in and with a no-pinch window sensor that is safe for children too.

Bad: A perfect car for the city or road trips with everything all in, and nothing bad except maybe a stewardess inside it!

Verdict: Small touches count and the Fortuner, does win it with a “no-pinch sensor” that shows what TLC means to Toyota.

When driving signalling and lighting the road is crucial for night driving especially. Having the right equipment is advantageous, whether it’s night or day!

Good: A full set of equipment that is standard, plus auto-lights that come in handy at night. Plus, a rain sensor that works without activating the wiper, most of the time.

Bad: Looking for anything amiss is useless because it has everything in top-notch option.

Good: Just like the Trailblazer, it has full options and equipment that counts.

Bad: A rain sensor is not installed, unlike the Trailblazer which has one.

Verdict: Small stuff matter and in “Car Showdown 101: Chevrolet Trailblazer 2018 versus Toyota Fortuner 2018” that will win the point, like a rain sensor. Just add little more TLC from Chevrolet gets points too.

Between the Trailblazer and Fortuner, both are good options, but only the Trailblazer won out in the end! This American import shows how it muscled its way, with some extra TLC for better driving points!

The winner is the Trailblazer for extra modern safeties that the Fortuner lacks. All the features and specs are good with the higher torque, power, and an amazing wading depth compare to the Fortuner. Whether it’s the Burly Chevrolet of simpler Toyota, just choose what is better for you!