This is a classic pair-off between similarly equipped sub-compacts that will have subtle differences. It falls to the cost of the unit as the deciding factor.

When the differences are fancy versus practical styling! Is it practical versus more stylish design? Then the Wigo and Celerio are a perfect fit for this car comparison. Between the two sub-compact options which have similar specifications, and are one of the smaller sub-compacts in the market today. By, these premises don’t expect performance beyond what equipment is available for these particular car options.

FYI, most car buyers are looking for affordable options like these, which aren’t hard to maintain and is perfect for a budget buy. One thing though is that these options are basic and will have average performance, can barely fit more than four adults who are on the big side. But, these options are meant to be functional and practical not really meant for types who are picky about car interiors. Before considering, these options which have the former selling points marked out for a decision. 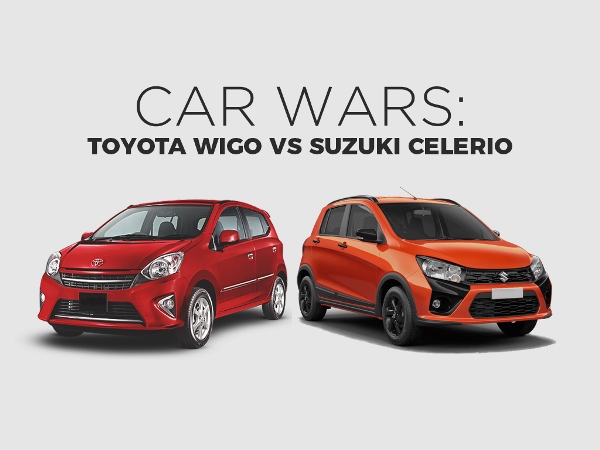 Here’s a case of two sub-compacts that mirror each other, so closely that the dimensions almost match up!  So, it is either how long or how tall which are two different dimensions.

Good: The Wigo offers more length and more space, in a lengthwise dimension.

Bad: It loses to the Celerio by twenty millimeters, when it comes to height,

Good: Having extra height can fit taller passengers, so it’s better than the Wigo in height.

Bad: Quite shorter that the Wigo; a bit by sixty millimeters, which is significant.

Verdict: Neither tops the other totally and are even in overall width, so it’s a point and a draw for both.

Overall performance is a must for any car comparison. Small cars will get a boost from better horsepower, torque, and engine displacement which mean more pull and power. The transmission is a Continuously Variable Transmission (CVT) for better gearing.

Good: The Wigo has a better engine, with improved rear suspension for improved road handling

Bad: Important points were lost in horsepower, torque, and transmission options which is important for better performance.

Good: The Suzuki pulled it off in key points that are crucial. These are horsepower, torque, transmission, Euro-4 compliant, and are much cheaper than the Wigo.

Bad: The engine is not as capable and tested as the Wigo, so that makes a bit of a difference.

Verdict: As an option, the Celerio has key points almost covered, and it’s a better option.

This is a big thing in this auto brawl because safety is a big thing! Pitted against each other, all options should have at least the basic equipment.

Good: All the basic options are equipped in this sub-compact, so it’s a good choice.

Bad: No Pretensioner is equipped, and that cost this round dearly.

Good: Giving an extra dose of TLC with a Pretensioner and a power mirrors that is convenient and safe!

Bad: Nothing bad for a basic and low-cost sub-compact in this showdown.

Verdict: A first win by the Celerio with a dose of extras that is a nice touch. The Wigo needs to do better!

Even low-cost options like sub-compacts with basic equipment will need a degree of comfort options. Or suffer drives that will be unbearable; or no choice to endure each day of it. There is no such thing as an option that wins in this comparison review, without enough comfort options.

Good: It wins this road with steering wheel controls which is more convenient, that reaching over.

Bad: It’s an average sub-compact that has good enough comfort.

Good: An even match to the Wigo and has everything it has, for basic comfort.

Bad: Most options have steering wheel controls equipped, but the Celerio hasn’t it equipped.

Verdict: Another decisive win by the Wigo in this round of pitting specs against each other.

Small cars are either plain Jane or small fancy pants with the right signalling and light equipment too. Sub-compacts will benefit from some fancy lines, especially if it nearly hits 800k as the unit cost!

Good: The Wigo has some stylistic elements that improve the look of it. With all the basic equipment installed in it, for better lighting and signalling.

Bad: Nothing because it’s pretty much, standard with all the equipment installed.

Good: For an affordable SRP; with all the basic exterior equipment installed that counts.

Bad: Some may not like how it looks because it seems to be dated in appearance with none of the fancy styling.

Verdict: Looks are secondary, but basic exterior equipment is an absolute must, and both are a draw. No points are in favor of either.

6. Toyota Wigo vs Suzuki Celerio: Which is better?

Winning as the better car option in this battle is no fluke! All the specifications are compared and contrasted to see which the better sub-compact between the two is. Sub-compacts don’t have the lion’s share of the best features, and they tend to draw it out on the basic features. But, the Celerio wins out because of a small difference most of the time.

Overall, the Celerio wins by a good margin that means it does count as a better option. The Wigo is just trailing but still just as good with better styling. The final result will depend on personal preferences; despite the final tally.